We have seen Yeti grow a lot during the first year….

Of course we are far from done…  Yeti has a lot of interesting plans for the next year, including:

Position control: Several colleagues accustomed to other 4D manipulators would prefer to have separate turning knobs for each axis. We are planning to provide such an option that will also off-load all the motor control out of Yeti’s GUI, thereby providing better during acquisition. This 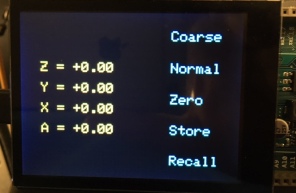 new device, called Knobby, is in its advanced stages of development.  It features a beautiful touch screen to interact with the user and display position information.  The 3D mouse control will still remain an option for those of you that prefer to keep working with it. Knobby is expected to be available soon.

Processing GUI: While some colleagues have developed and are happy with their own processing pipelines, other users would rather have a simple interface to perform standard image processing of the acquired image sequences, such as alignment, cell segmentation, signal extraction, and spike detection.  We are planning on producing such interface this year that will make life easier for many users.

Support of memory-mapped files: Yeti will provide a memory mapped file with a ring-buffer of recent data that can be consumed by other processes performing real-time analysis of the data stream.  This can come in handy for those of you that want to perform closed-loop experiments or want to develop your own real-time spike detection algorithms.

SLM path and control for optogenetics:  Yes, yes, we know…  you need this as soon as possible! We are working on it!  If there are any suggestions as to the kind of protocols you would like implemented for stimulation let us know.

Of course, if there is any other features that will make your work easier just add it to the comments section.  Depending on demand and feasibility, we will try to include it.

In the meantime, happy holidays to Yeti users everywhere and may the new year bring peace, health and great science!

2 replies to Yeti turns one! (and plans for next year)