The latest release adds a few new features and fixes.

A new panel called “Deadband & Alignment” offers the option to change some of the configuration variables on the fly. 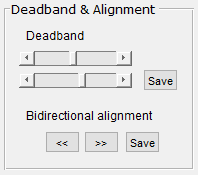 The deadband sliders allow to dynamically change the size of the left and right margins respectively, where the laser is blanked out.  You can optionally click the save button to save the settings at the end of the configuration file for future use.

Within this panel there is also the option of adjusting the alignment of even/odd lines during bidirectional scanning on the fly.  To use this first make sure the resfreq and lasfreq configuration variables are set to the correct values of the resonant and laser frequencies.

Typically the resonant frequency will be around 7930Hz, while the laser frequency, measured at 920nm wavelength, will be slightly over 80MHz.  Try to measure these values are accurately as possible.

The ncolbi configuration variable is now gone from this and any future versions. Only bishift is used at each magnification to adjust the line alignment, which can now be positive or negative.

To calibrate, pick a magnification, set the scope in continuous resonant mode for a few minutes, and start scanning.  You can now dynamically adjust the alignment by clicking on the << and >> buttons.  Using pollen grains is ideal for this step.

To have a closer look at the alignment you can digitally zoom into some features of the image by clicking Zoom in the navigation panel and then zooming into the region of interest.

Once satisfied with the adjustment you can stop scanning, move to another zoom setting, and repeat the process.  At any point you can hit the Save button to the right.  This will append a line with the new bishift settings to the end of the configuration file (effectively overriding the previous setting).

In the previous release a rounding bug caused some pixels to appear displaced in the image during bidirectional scanning.  This has now been fixed. The new version should allow you to get a very good results. Here is an example of a 40 LPMM Ronchi at a magnification of 1 and digitally zooming in to see details:

And zooming in again (you can click on the images to get them in full size):

If you have trouble with bidirectional alignment let me know.

Make sure the HSYNC signal is symmetric and approximately in-phase before starting the calibration process as described in the first section here.

Another feature in the new version is the ability to change the warm up time for the resonant mirror.  This is the time the resonant is turned on before the scan begins.  The default is 500 ms but can be changed with the wdelay configuration variable, which dictates the delay in units of tens of msec (so 50 = 500 ms).

Finally, you will see some new controls under the Laser panel.  These are additional controls to control the Coherent Discovery laser.  They provide control of the shutter for the fixed laser and the GDD slider for the pre-compensator.  To enable these controls the laser_type should be set to ‘DISCOVERY’ — otherwise they will be grayed out.

1 reply to New Features in Scanbox 3.4