To take advantage of the new features in the latest release of the Yeti firmware you should start by getting rid of the half-wave plate control of the laser power. To do so start by removing the motor and half-wave plate from the optical path feeding the laser beam directly into the Pockels cell as shown in the picture below.  Make use of a detector card and/or power meter to check for alignment. 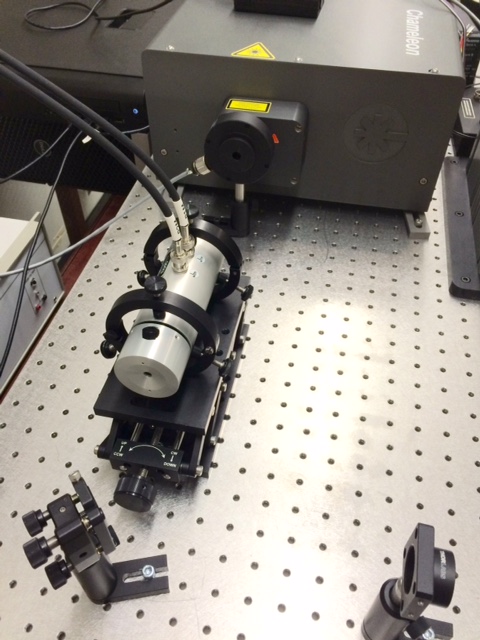 Make sure the Pockels cell is aligned so that there is minimum transmission when the reading in the front panel is zero.  The power of the laser in this new arrangement is controlled by a slider in the Chameleon panel, which provides control from 0% to 100% of the power. 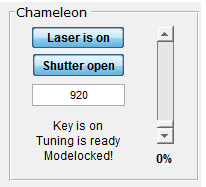 The software takes into account the fact that at 920nm the relationship between power and control voltage is non-linear, so you should get an approximate linear control of the power using the slider.  This new feature provides for an absolute control of the power across experiments (as compared to the the relative position of the wave-plate in the original design).  You should also get increased power, as the new setup avoid loses via multiple reflections.

Using the new firmware you also have control over the size of the dead-band at the edges of the scanning.  A new variable in  the configuration file, sbconfig.deadband, can be changed by the user.  The two numbers of the vector reflect the size of the dead-band at the left and right margins of the scan in percent of the total number of samples before spatial correction.

The reason for this changes is that this new setup also allows the software to rapidly change the power, a feature that will be needed when the Optotune lens is incorporated for fast z-scanning in the near future.  If you plan to use the optotune, you should be upgrading to this new firmware as soon as possible.

The lastest firmware is located in the Scanbox/drivers/ subdirectory.

To update the driver start the Bootloader Host application (look under the Cypress Programs Folder).

Select the new Firmware file you want to upload (the one in the drivers/ directory), power cycle Scanbox to get it into boot loader mode.  Once you turn the box on you will have 20 sec to upload the new firmware (once the time elapses Scanbox will start running the existing firmware).

Select the USB Human Interface Device that will appear in the ports panel, and click the download button (the one highlighted in blue).

If everything works you will get a message that the firmware was successfully uploaded (it should take 3-4 seconds to complete).  Once the new software is uploaded Scanbox should be ready to use. 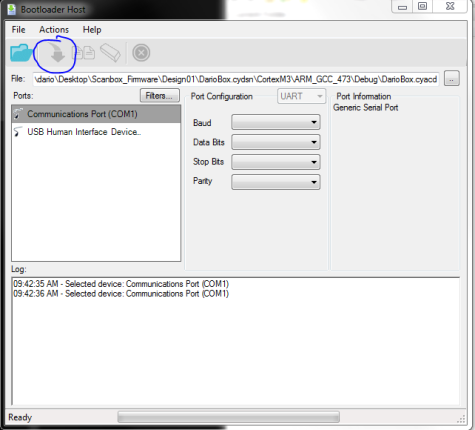 Note: You can download the PSoC suite from here but make sure you select “Custom” installation (instead of “Typical”) and select  the “bootloader host” only for installation (otherwise you will be installing the whole suite and it will take a very large amount of time/space).